THE end of season classic

Mont Fourchon is a border summit on the long ridge that goes from Grand Golliat to the Grand Saint Bernard col: a classic end-of-season route that is usually undertaken when the road to the col has been reopened. The trailhead of this pleasant, varied route sits where the route is closed in winter. Once you have reached the Baus Pasture, climb the valley that leads to the superb final valley. From the top, you will enjoy marvellous views onto the Gran Saint Bernard area, as well as the Pennine Alps.
The descent is freely along your uptrack.
Approach
From the motorway exit Aosta Est, take the tunnel leading to the Grand Saint Bernard valley, then follow it and go beyond the hamlets of Gignod, Etroubles and Saint-Oyen. Turn right shortly before Bosses and take the state road 27 leading to the Grand Saint Bernard Col. Drive past Saint-Rhémy and, after 1,3 km, you will reach the place where the road is not cleared from snow during the winter months. Park in the nearby spaces.
Description

Follow the snowy road closely as far as the plateau, where you cross the Gran Saint Bernard stream. Once you have traversed it and are on the bridge, turn right and follow a shallow forestry road that runs alongside the hamlets of La Tuette (1778m) and, shortly afterwards, goes underneath the Tunnel viaduct. Descend slightly on the bottom of the valley and then climb the steep couloir at the centre of the valley until you reach the Fonteinte plateau. Turn left and leave the road to proceed N towards the typical rocky tower, known as Tour des Fous. Leave the Tour to the left and carry on towards the Baou Pasture (2.369m), just before the ample final basin. Climb a series of bowls and hillocks, turn left and make a traverse before turning right to climb the last short section, leaving the skis just below the summit. (2.906m).

Descent
Make the descent freely via your uptrack. Enchain your laps freely on pleasing slopes until Fonteinte, where you’ll continue straight on the valley floor until you reach the Grand Saint Bernard tunnel viaduct. The last section is along your skin track. 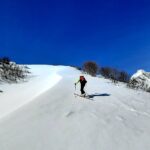 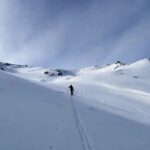 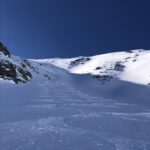